this is a very classic backtrace problem.

Idea is simple, use ‘call stack’ to store string “a…z”

if stack.length == targetLenth
loop though stack to get char array to string.

Linux Kernel has lots of data structure such as list (including linked list, double linked lists), red-black tree, B Tree , Interval tree, Heap, Radix tree, spin locks and so on.
I will put some articles for these interesting data structures.

List is most simple data structure we could start with.

what this function todo is put entry between next and prev.

del is to delete all items between prev and next. therefore, set next’s prev to prev node.
and prev node’s next to be next node.

delete old one and linked new one to old one’s postion.

delete from one list and add as another’s head

move head->next to head and tail.

some other functions such as list_cut_position is to split list into two.
and list_splice is to join two lists

some macro are defined in such format, there for developer don’t have to write “for” every time

if mushroom number on the dish is less that (15-5), Kaylin will finish all of them and waiting for next refill.

The basic idea is using two for to loop though to counter smaller number on its left.
Solution1:

Solution 1 is using two loops to go though to compare.

This solution is faster the second loop using tree.

Given a binary tree, imagine yourself standing on the right side of it, return the values of the nodes you can see ordered from top to bottom.

For example:
Given the following binary tree, 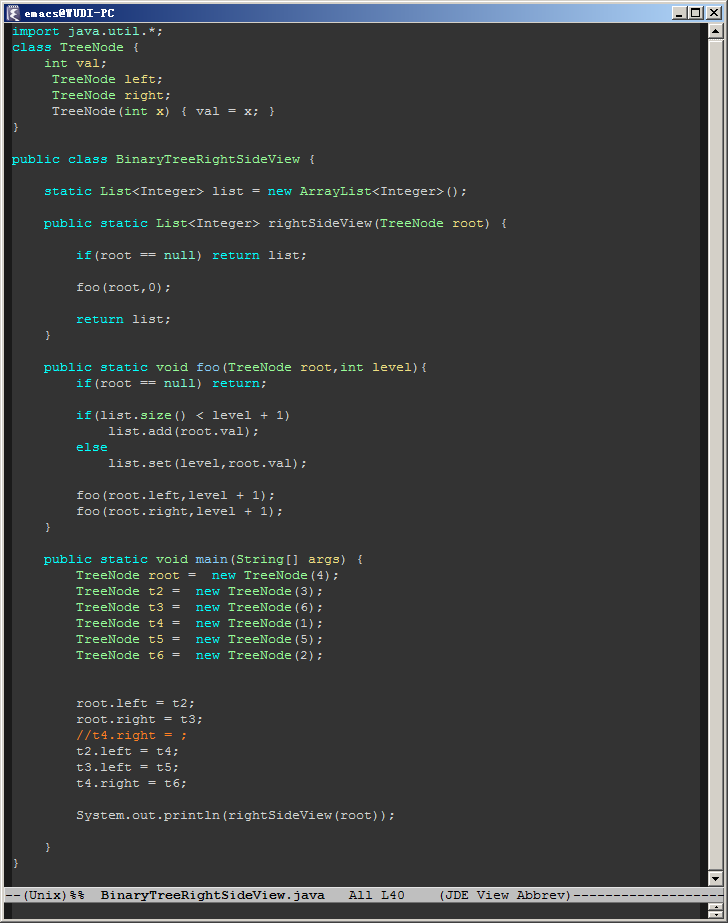 Given a string s consists of upper/lower-case alphabets and empty space characters ' ', return the length of last word in the string.

If the last word does not exist, return 0.

Note: A word is defined as a character sequence consists of non-space characters only.

Solution: see the comment in the code , writed in Java

A blog of software/firmware developer
Welcome to discuss any questions.
wudi.lab@gmail.com.